Want to significantly increase your breathing power and speed in the water? Here’s a breakdown of how the PowerLung can help you do just that.

Swimmers face a unique problem in the water.

Unlike runners, ball players or cyclists, swimmers need to time and manage their breathing. For the competitive swimmer the way we breathe is something we have to think about (although for many swimmers—it’s a bit of an afterthought).

Sprinters need to train themselves to not breathe at all during 50s. Swimmers of other distances need to plan and judge how many breaths they are going to take in and out of the wall. There is the consideration of what side to breathe on, how many strokes to take off the start without breathing, and so on.

A more powerful breath allows us to choose when and how to breathe. It allows us to slurp down more oxygen with each breath. We become tactical with our breathing.

Compare that to the swimmer who breathes by the seat of their Speedo, forever lurching their heads from side to side, breathlessly and sloppily trying to get more oxygen down to their lungs and muscles.

How Swimmers Can Train the Respiratory Muscles

Weak breathing and lung muscles are easy to spot: we gasp and scramble for oxygen early in the main set or during our races. We huff and puff mightily, racing to catch our breath at the end of hard efforts. And weak breathing muscles means our technique goes to hell because we are having to breathe every stroke to keep our muscles supplied with oxygen.

Being the swimmer that is always hanging onto the gutter for dear life trying to catch their breath sucks.

That’s where training your respiratory muscles comes in.

There are different approaches you can take to increasing breathing power. One you may be familiar with is using breathing patterns. Breathing every 3, 5, or 7 strokes for instance. Or performing progressively more dolphin kicks off of each on of your push-offs and turns. Or we use aerobic training in the water to boost our lung capacity and endurance.

For you swimmers who love to look for dryland ways to get faster in the water (and there’s a lot of you judging by the contents of my inbox) and aren’t a huge fan of trying to improve lung capacity solely through breath-holding (I’m there with ya if that’s the case), there’s another way to get stronger breathing muscles.

It’s to use a device, in this case a PowerLung, like a set of weights to strengthen your ability to inhale and exhale.

What is the Power Lung?

The PowerLung is a little plastic tube, about 6-7 inches long with a mouth piece and two dials that increase or decrease the resistance of your inhalation and exhalation. 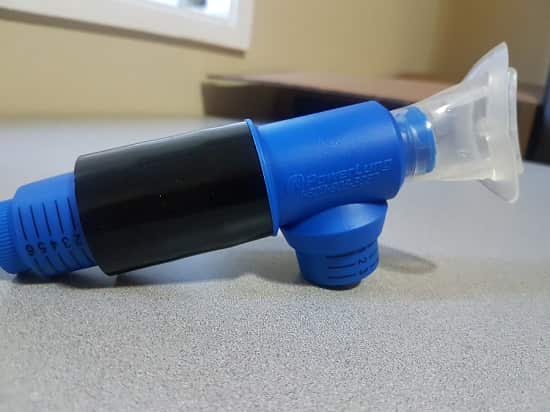 Sounds kinda kooky—weights for my lungs?—but does using a PowerLung actually help you swim faster?

One study had a group of 16 age group swimmers and had them do thirty reps (one inhale + one exhale = one rep), twice a day, over six weeks. At the beginning and at the end of the training period the swimmers did time trials in distances of 100, 200 and 400m.

To put that level of improvement into context, if your best time for the 100 is 56 seconds, this study would suggest that on average you could expect a 0.95 second improvement after just six weeks. That kind of drop is legit given that it takes a few minutes a day and doesn’t require you to swim an additional meter.

My Own Experience Using the PowerLung

For a hunk of plastic the PowerLung was surprisingly expensive. Well over $100. So I had my doubts when I picked up the PowerLung Sport (there are a couple different versions of the PowerLung—the Sport is the hardest one).

The device is simple enough: a mouth-piece to blow into and two dials to adjust resistance on the inhalation (1-6) and exhalation (1-3).

Although it looks simple, this device is really difficult. After three weeks of semi-regular use I still cannot inhale on level 2, it’s that “heavy.” Which I suppose is also great news—lots of room for improvement!

Some of the key things I noticed using the PowerLung after three weeks:

The portability factor is killer.

Off day from the pool? Use the PowerLung. Going away for the weekend and don’t have access to a pool? Throw it in the little plastic carry pouch and take it with you. I keep it in my office on my desk so that it’s always there, ready for action.

You can train your lungs anytime, anywhere, so there’s no excuse not to make use of this bad boy.

My ability to suck in air improved. Big time.

This is a hard one to describe, but breathing simply feels easier. The rush of air going in feels almost effortless. Whether I am at the pool or at home, taking a big breath just feels better.

Beyond what the PowerLung can do for my swimming it’s pretty neat to be able to say that I am breathing stronger.

I am not nearly as winded after all-out efforts.

Here’s the big benefit, and the one you are likely most interested in. How well did the PowerLung help me recover during super hard sets and workouts?

While there were still times I was huffing and puffing, it was far more controlled than in the past. My muscles will run out of gas before my breath gets away from me. Which is a new and entirely awesome thing.

Another big benefit when it comes directly to swim performance is that by being able to suck in more when breathing, I need to breathe less.

How cool is that?

Whereas before sprinting long course 50s I would need to be breathing every four strokes, over the past couple weeks I’ve been jumping up to 6 and 8-stroke breathing.

My underwater dolphin kick work has benefited as well: by being able to slurp down more oxygen into the walls and before pushing off I am getting extra distance off the walls without running out of oxygen.

I am not a fan of hypoxic work in the pool. Not even because of the dangers associated with it (hello there, shallow water blackout) but because I just don’t enjoy it.

In a lot of ways, using a PowerLung is a much safer alternative to the breath holding work swimmers do in training.

Breathing with more force—and seeing your improvement over the days and weeks on the resistance dials is more fun than traditional hypoxic training. In my opinion.

Do it before practice and your races to supercharge your warm-ups.

Warming up your respiratory muscles is probably not something you have ever really thought about. After all, we spend all of our time thinking about getting the blood flowing, our technique dialed in, and our muscles nice and loose.

But your lungs—those hilariously important and underappreciated muscles that they are—need to get warmed up too. It’s why those first few laps of practice it can feel a little struggley to breathe every 3 strokes, compared to the end of the practice when you can swim half the pool without breathing. Your breathing muscles are fully warmed up by that point.

Before heading to the pool I would bang out a dozen or so pulls on the PowerLung: this way my lungs were loose and primed by the time I got into the water.

Using the PowerLung before training and competition can help you swim faster, and that’s the whole point, right?

Where to Buy the PowerLung

The PowerLung comes in a handful of different versions.

The Sport, the one I picked up, has the most resistance to it, and is “designed for elite athletes and strenuous, competitive training activities.” That said, my girlfriend—who isn’t an athlete—was able to use the device on its lowest settings relatively easily.

There is also the PowerLung Trainer, which is their middle of the road device. It’s still effective and recommended for those looking to improve sport performance (or even musical performance, for that matter).

They both retail at around $120 each. A bit pricey, but you can’t really put a price tag on being able to breathe better!